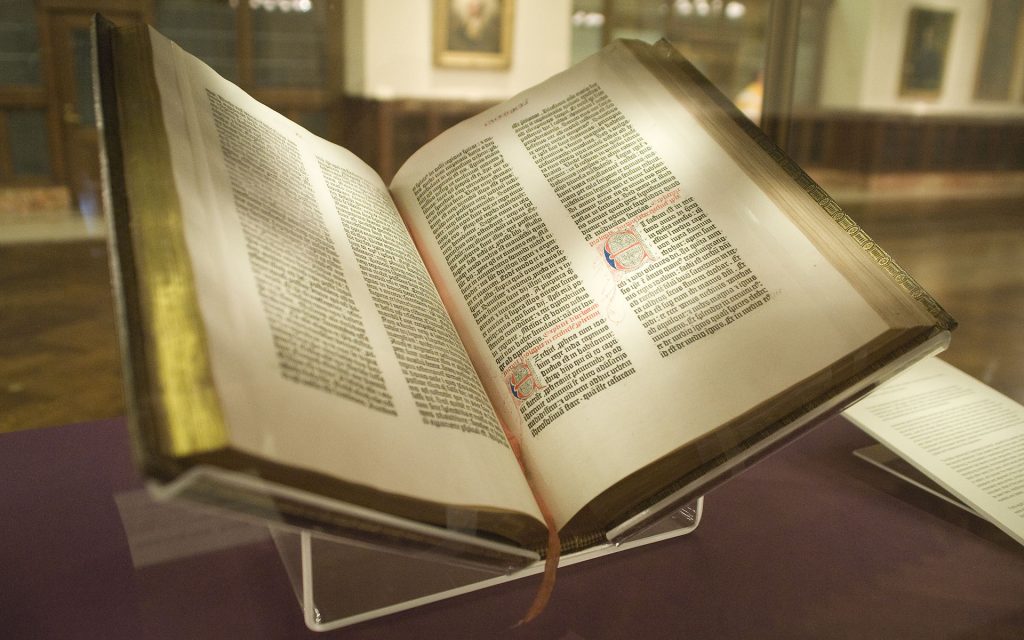 Douay-Rheims or NABRE? Inclusive Language or Traditional? Confraternity, Holy See or USCCB approved? A search for the perfect Bible can bewilder even the most faithful Catholic. With a dizzying array of Bibles to choose from, which translation of the Bible is best? If you’re Catholic, the easiest answer is “any translation of the Sacred Scriptures that has received proper ecclesiastical approval ‒ namely, by the Apostolic See or a local ordinary prior to 1983, or by the Apostolic See or an episcopal conference following 1983 ‒ may be used by the Catholic faithful for private prayer and study.” 1. So all things being equal in terms of official Catholic Bibles, it’s really just a matter of personal preference. Here are a few of the more popular versions that you can find and what to expect from each of them.

Predating the King James Bible by nearly 30 years (1582), the Douay-Rheims Bible is the original Catholic translation of the Bible into English from the Latin Vulgate. As such, it’s purpose was to translate in “a strongly literal manner from the Latin Vulgate” which sometimes resulted in a “stilted syntax and Latinisms.” 2.  The roots of Douay-Rheims are the Catholic Latin translations of the original Hebrew, Aramaic and Greek. Tending to be more Old fashioned, this is the Bible of choice for a more traditionalist approach to Bible study.

No longer in print, this was the first “American” version of the Biblical translation, started in 1936 by the American Bishops’ Confraternity for Christian Doctrine after Pius XII’s encyclical Divino afflante spiritu. 3. This was the translation used for the Catholic Liturgy through the 20th century, but was not completed before Vatican II.

The RSV-CE Bible was translated in the 1940s and 50s by the National Council of the Churches of Christ, and adapted for Catholic use by the Catholic Biblical Association. 4. It’s considered an excellent combination of traditional literalism with a more modern literary and decidedly American take on the classic translation.

The New American Bible was translated by the Confraternity of Christian Doctrine for use in the Catholic Liturgy with specific respect to the principles of Vatican II. It was the primary translation used in the Church from the 1970’s until 2002. 5. Going through several versions during that time, including revisions to both the Psalms and the New Testament, the New American Bible – Revised Edition (or NABRE) is the closest translation available to what is currently used in Mass Liturgy. There are some discrepancies due to an ongoing discussion about “inclusive language” in the NAB translations, that is, rendering traditionally masculine language into a more gender neutral language (“person” in place of “man”) 6. Some instances of inclusive language were restored to their original masculine form, while others that were not specific in the original text were left inclusive. Consequently, many feel that the NABRE Bible is a more modern, approachable translation than more traditional texts. The Confraternity of Christian Doctrine however, is currently working on a final translation intended for personal and Liturgical uses in order to unify what every Catholic is reading at home and at Mass. However, it is not expected to be finished until 2025. 7.

At the beginning of this year’s Lenten season, Pope Francis posed the question, “What if we checked our Bibles as often as we checked our phones?” With a wealth of history and multiple translations to choose from, perhaps now is the time to finally start carrying a Bible with you wherever you go, and answer the Pope’s challenge!

First Marian Shrine in the USA

Did you know that the first Marian shrine in the United States is located in the same place as many in other “firsts” in the country? These include: The first …

from catholicshop.com http://ift.tt/2luDLnW Need a good book to read during Lent? Take a look in our book section http://bit.ly/2kQff1X and enter code BOOKS10 during checkout!