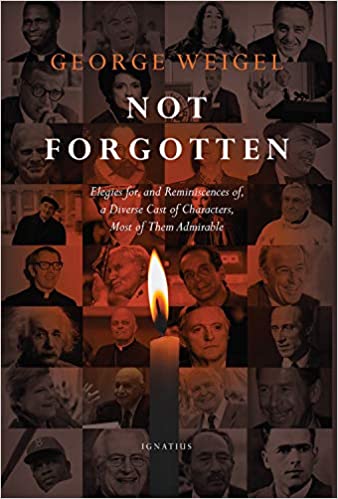 Not Forgotten: Elegies for, and Reminiscences of, a Diverse Cast of Characters, Most of them Admirable George Weigel (Ignatius, $24, 221 pages)

George Weigel, the popular Catholic writer and biographer of Pope John Paul II, has collected more than 60 columns, essays and eulogies on (mostly) famous people Weigel knew, sometimes personally, occasionally far afar, who have died. Many of the names will be recognized by Interim readers (Fr. Richard John Neuhaus, Chuck Colson, William F. Buckley, Charles Krauthammer, Flannery O’Connor) and others may not, but all of them provide an example of how Christians should (or should not – Fr. Andrew Greeley and Senator Daniel Patrick Moynihan jump out as exemplars) engage the public square, to use the phrase of Fr. Neuhaus. The seemingly unusual “cast” of characters offer a little something for everyone with Cass Elliott and Pete Seeger (music), Flannery O’Connor and Tom Wolfe (literature), Earl Weaver and Jackie Robinson (sports), and Henry “Scoop” Jackson and the aforementioned Moynihan (politics) joined by other less well-known personalities such as former Librarian of Congress James Billington, journalist Cokie Roberts and her ambassador mother Lindy Boggs, sociologist Peter Berger and lawyer Robert C. Odle Jr. These are more sketches than obituaries, and Weigel specializes in showing how his contemporaries have “wrestled with the profound changes that have come to both Church and world” over the past seven decades. When Weigel says that most teach us about “righteous and noble living” he shows how Catholic Congressman Henry Hyde lived his faith by upholding the right to life for all human beings while the Catholic Senator Moynihan bought into the false dichotomy of being personally opposed to abortion but doing “virtually nothing about the great civil rights issue of the late 20th century: the defense of the right to life.” Most sketches are two to four pages and the book makes for perfect snippet reading.