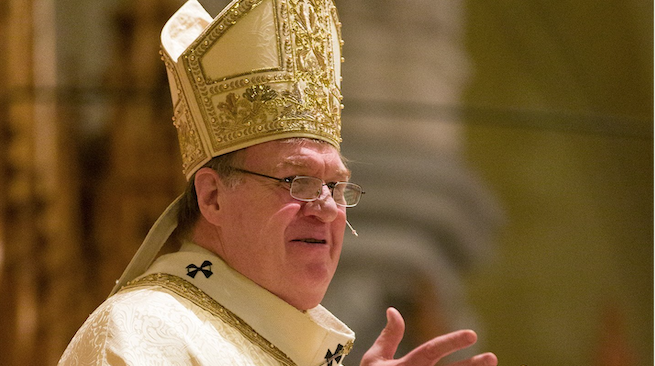 Cardinal Joseph W. Tobin of Newark, N.J., is seen at the Cathedral Basilica of the Sacred Heart during the Mass of ordination of deacons July 11, 2020. (CNS photo/courtesy Steve Hockstein via Archdiocese of Newark)

CNA Staff, Sep 16, 2020 / 01:45 pm (CNA).- Cardinal Joseph Tobin of Newark said on Tuesday that voters could choose Joe Biden in good conscience, and suggested he would have difficulty voting for President Donald Trump. The cardinal told CNA Sept. 16 that his comments were not intended to endorse any political candidate for office, but declined to say whether he believes a Catholic could vote in good conscience for Donald Trump.

While the cardinal’s remarks Tuesday recognized that the Democratic party platform seeks to “remove the unborn child from the equation,” Tobin did not indicate what issues he thought might justify a vote for Biden, in light of the U.S. bishops’ conference teaching that ending abortion is a “preeminent priority” in public life.

“I neither endorsed nor opposed anyone running for office. I simply reminded Catholics of our responsibility to take part in the elective process,” Cardinal Tobin said in a statement to CNA on Wednesday.

Cardinal Tobin spoke Tuesday on a panel on “The Church and Catholic Voters in the 2020 Election,” hosted by Boston College’s Boisi Center for Religion and American Public Life on Tuesday.

During the panel, the cardinal said of the November presidential elections that “a person in good conscience could vote for Mr. Biden,” the Democratic Party’s presidential nominee. The statement provoked backlash from Catholics who pointed to Biden’s expansive abortion agenda as a reason not to vote for the candidate.

But Tobin said Tuesday that “I, frankly, in my own way of thinking, have a more difficult time with the other option,” in apparent reference to Trump.

The cardinal added that “[t]here are serious reasons to not consider either [political] party as being representative of the Catholic tradition,” but added that “the problem is we have to vote. We should vote.”

In a statement to CNA from the Archdiocese of Newark, Cardinal Tobin echoed the USCCB’s guidance to Catholics in the document “Forming Consciences for Faithful Citizenship,” saying that he “recognizes that Catholics often face difficult decisions about how to vote as well as the need for a properly formed conscience in order to make a selection that respects the tenets of our faith.”

“A Catholic cannot vote for a political candidate because he or she supports an issue considered an intrinsically evil act, such as abortion, euthanasia, deliberately subjecting workers or the poor to subhuman living conditions or assisted suicide,” the statement said.

“At the same time” the statement continued, “a voter should not use a candidate’s opposition to an intrinsic evil to justify indifference or inattentiveness to other important moral issues involving human life and dignity.”

The archdiocese directly cited “Forming Consciences,” which states that “A Catholic who rejects a candidate’s unacceptable position on policies promoting an intrinsically evil act may decide to vote for that candidate for other morally grave reasons. Voting in this way would be permitted only for truly grave moral reasons, not to advance narrow interests or partisan preferences or to ignore a fundamental moral evil.”

CNA asked Cardinal Tobin about the possibility of Catholics voting for a third party candidate, and whether he believed a Catholic could, in good conscience, vote for President Trump.

The cardinal did not directly address those questions, but emphasized that he had not endorsed any candidate for office, and that Catholics have a responsibility to vote. In fact, “Faithful Citizenship” teaches that a Catholic can, in good conscience, choose not to vote in a particular race if the voter judges there to be no acceptable candidates.

Tobin did not offer the “grave moral reasons” that he thought might justify a vote for Biden, whose campaign has said his administration would to codify abortion protections into federal law, permit direct federal funding of abortion through the repeal of the Hyde Amendment, restore federal funding to abortion providers, and attempt to prevent the passage of limitations on abortion by state legislatures.

Biden has also said that he would repeal the religious exemption to the HHS contraceptive mandate, which granted relief to opposing groups such as the Little Sisters of the Poor; a repeal could reignite the Sisters’ years-long legal battle against the mandate.

Joseph Meaney, president of the National Catholic Bioethics Center, told CNA last week that Biden has taken “the most extreme stance he could on the abortion issue,”

During the panel, Tobin said Catholics should vote in favor of the common good, exercise prudence, and avoid reducing an election to “how a candidate stands on a single issue,” at least, he said “within the current panorama of issues.”

“I suppose if somebody was running on a nuclear war platform, advocating a holocaust, worldwide incineration, that might be the single issue that could make the discernment a lot easier,” Tobin said.

Critics of Biden’s agenda note that it would reinstate foreign aid to providers of abortion, and support United Nations efforts to expand protections and public funding of abortion globally. According to the Guttmacher Institute there are 73 million worldwide abortions globally.

For his part, Cardinal Tobin has been critical of the Trump administration’s immigration policies and resumption of federal executions.

In a January 2019 op-ed in the New York Times, he criticized Trump’s policy of building a wall on the U.S.-Mexico border; Tobin said the president “is not acting with concern for the impact of the wall” on the lives of migrant families and has tried to justify its construction by using “lies and smears against the vast majority of immigrants who are law-abiding and moral.”

In 2017, Cardinal Tobin told CNA that Vice President Pence and President Trump addressing the March for Life “was very encouraging,” but that Trump’s immigration policy “needs to be challenged and needs a respectful debate.”

As Archbishop of Indianapolis in 2015, Tobin’s archdiocese resettled a Syrian refugee family in Indiana despite then-governor Mike Pence’s suspension of accepting Syrian refugees in the state.

Then-archbishop Tobin met with Pence over the matter and “prayerfully considered” the governor’s policy before deciding to move ahead with resettling the family; Pence said he respectfully disagreed with the decision.

Cardinal Tobin in July also asked for clemency for one of the federal death row inmates executed by the U.S. this summer, Dustin Honken.

As Trump’s administration resumed the federal government’s use of the penalty in 2020, Cardinal Tobin warned that Honken’s execution “will reduce the government of the United States to the level of a murderer and serve to perpetuate a climate of violence which brutalizes our society in so many ways.”

Tobin said he had known Honken for seven years, dating back to his time as archbishop of Indianapolis; the archdiocese includes Honken’s federal prison of Terre Haute in its territorial jurisdiction.

Other U.S. bishops have also raised objections to Trump’s resumption of the federal death penalty. Biden supported the death penalty until 2019, and his running mate, Kamala Harris, has been criticized for her defense of California’s death penalty during her stint as the state’s attorney general.

Asked what Pope Francis would say to voters, Tobin speculated Tuesday that the pope “would encourage people to make their political decisions in light of their faith, and not try to even use a pope as a prop for their own moral discernment.”